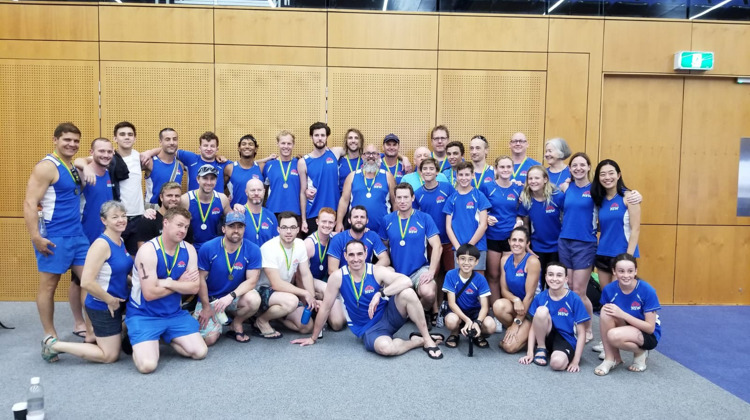 We were very excited to field out very first NSW U15’s team. Albeit there were only 3 juniors from NSW in the team, but it still counts! The rest of the team was fielded by other juniors from Adelaide, Cooktown in far north Queensland, New Zealand and we were very lucky to have 4 juniors from Malaysia on the team who don’t yet have access to any junior underwater hockey competitions in Asia.

Bringing a team together that had never played together before, it was always going to be a challenge for the team to be competitive at the comp, and unfortunately finished in 6th place but they pulled together some spirited performances including a nailbiter against WA Black, going down 5-4, in addition to scoring goals against the top teams. Shout out to our very own juniors, Jack Smit from Sydney, Max Ernst from Newcastle and Joel Powell from Wollongong, for competing in their first nationals and we hope to see them representing NSW for many years to come.

Being the raining gold medallists for 3 years straight, the NSW Masters team were always going to have a target on their backs. Buoyed by some fresh input from new coach and former worlds gold medallist Matt Terrey, the NSW masters were looking very promising for a 4-peat in what was a highly contested masters division, with a lot of players coming out of the woodworks for other teams to trial for the Aussie Masters team. However they were set back the week before the competition, losing handy left-hander Francis Yanga to a shoulder injury a week out from the comp and then being notiied on the Friday before the competition that two of their players from the Phillipines did not receive their VISAs in time to attend the competition.

Luckily two handy players answered the call up over the weekend to be late entries to the team, in former kiwi Stu Macmillan and the ever reliable, super breatholder Mick Martin.

Still, the team banded together and had a solid round robin, finishing second at the end to go into the semi-finals against QLD A. Unfortunately they were out-pipped in the semi-final to go down to QLD 5-3 but ending up beating Chengdu Bubble (China) in the bronze medal match to claim the bronze at nationals. I’m sure the team will have learnt a lot from this comp and will be back bigger (hopefully not in waist size) and better next year.

This year saw the revival of the NSW elite women’s team after a hiatus for two years where we didn’t have enough players to send a team to nationals. The team was pulled together with eligible players from across the state and former residents from overseas, in addition to 2 new international players, however the tyranny of distance (and their coach fleeing overseas for a few months before the comp ) meant the team couldn’t train together until the day before the competition.

Despite all that, the team performed strongly over the comp and played some nice hockey to take it to some of the stronger teams in the division. After going down to VIC 3-2 early in the round robin, we had some great games across the rest of the comp, including two draws against Chengdu and WA where we came back to clinch a draw within the last 2 minutes of each game, or specifically the last second of the Chengdu game :O Unfortunately those not winning those games ending up costing us a spot in the final so we finished 5th place.

Shout out to Rachel Hickey who led the team strongly from fullback and stepped in to help coach and organise the team when my commitments running the tournament prevented me from being with the team. Also a shout out to 2 players who made their debut at the elite womens level, Jenny Wang and Claire Rocquet, who performed well and improved a great deal over the course of the comp.

The past few men’s B teams that NSW has fielded have been a mixed bag of players who were attending to get more experience as they generally weren’t players up to the standard of the elite men’s yet. However this year we fielded a competitive B team where 8 or so of the players were easily up to standard of playing in their state’s top team but for various reasons weren’t selected this time round, including being bolstered by one reigning world champion in Hamish Arthur from NZ and Jamie North from WA who represented the Australian elite men in 2018. I was also surprised to find out we had 5 captains in the team who would all share the talking duties in the team chat before each game and at half-time We had a genuine belief at the start of the comp that we could play some really good hockey and make the finals.

We had very fortunate draw which saw us build to play some cracking matches towards the end of the round robin. We went down 4-3 to the NZ men on day 3 of the comp but from there went on to claim the scalps of VIC, TAS (eventual silver medallists) and QLD which was a first for any NSW B team in recent memory. Our 4th place spot in the finals hinged on the A team beating the NZ team in their last round match, however that game resulted in a draw, which knocked us out of the finals. It also didn’t help that the silly tournament organiser used an out-of-date points system which would have otherwise pushed us into 4th spot over NZ Still we finished the comp on a high, playing some beautiful hockey against the other Australian teams and enjoyed playing with a good bunch of lads all round. Shout out to Andrew Grove who also made his debut in the elite men’s grade and played some great hockey over the comp.

For a team who had finished second behind WA for the past few years, it felt from the outside looking in that this year was our year to pip WA and win gold for the first time at nationals. We had a great deal of depth to select from this year, most of the team was based around Sydney and could train together regularly, in addition to being whipped into shape by our friends from Sydney Underwater Rugby who made UWH specific swims for the boys at their weekly group swim session.

Unfortunately, the team would agree that they didn’t perform the best they could have once the competition started. The had some closely contested matches over the round robin, with some mixed results and ending up finishing 3rd going into the finals. The team were keen to have another crack at TAS, which they narrowly lost to in the round robin, but on the night the TAS team were the better team beating the NSW A team convincingly. The boys consolidated the next day beating the NZ team to finish with the bronze medal.

Congratulations to the boys who played strongly over the comp and were rewarded with selection in the Australian elite men’s and master’ squads to contest the world championships later this year (see below).

Thanks to those who gave up their time to referee the competition.

We were very short on refs this year so any time they gave was greatly appreciated by all.

Congratulations to those NSW players that were selected in their respective Australian teams or squads to compete at the World Championships on the Gold Coast in July:

Well done to all NSW athletes who went away and represented NSW (or other states/territories).

Special mention to Isaak Campbell from Sydney who won bronze with the Victorian U19s team.